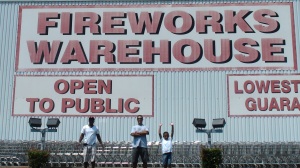 As the 4th draws near and millions clamor to their neighborhood fireworks stands to buy up the last of anything available, I recall some not so warm and fuzzy memories I’ve had to endure courtesy of my “he-keeps-it-interesting” husband Jon (pictured above with our son and my brother-in-law). His love of holiday explosives is, to put it mildly, something of a contradiction to his otherwise law-abiding, God-fearing disposition. The trouble lies in the fact that he likes to hear them BOOM, or see them fly, or both; all of which is illegal in California where we lived when most of the incidents occurred. While a dozen events come to mind, I’ll name my top four:

Most fireworks that are illegal in California are legal in other states. And though Jon always bought them legally in other states, some always seemed to find their way home before exploding, hence the many brushes with the law. But years have passed and kids have been born since those days, which have made for a more responsible, yet still just as interesting man; though he still grins like a fox in a chicken coop when the kinds he likes light up the sky or threaten to break the sound barrier.

What are some of your favorite fireworks escapades or 4th of July memories? Do you prefer fireworks shows, or lighting your own? I’m eager to hear about it.