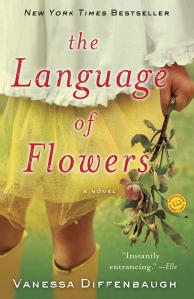 Throughout history flowers have been known for their beauty and fragrant scents. While commonly given as expressions of love and well wishes, their meanings became even more specific during the Victorian era. Dictionaries of the flower-to-emotion relationships were penned with care, but over time the language created for romantic expression faded to obscurity.

In Vanessa Diffenbaugh’s The Language of Flowers, the elegant art of floral communication resurfaces through the most unlikely of sources: eighteen-year-old Victoria Jones. The San Franciscan has just aged out of the foster care system and heads into the world with a chip on her shoulder and thorns in her heart.

She has no plans or ambitious dreams about her future, only a love for flowers and knowledge of their language that comes from a past failed adoption which haunts her. The details of that event remain hidden until the end of the book but one thing is clear: Victoria is so afraid of love and relationships, and so certain of her own lack of worth, she is determined to live as much of a life of isolation as possible.

But the need to survive forces her as far out of her shell as she believes herself willing to go, and she soon begins to use her connection with flowers to help others. She is given a fresh start at life in the company of people who want to make her part of theirs; but her past is like a jealous weed determined to prevent her from blossoming out of its muddy clutches.

A story of second chances, The Language of Flowers is beautifully written and emotionally draining. Victoria makes enough bad choices to tempt even the reader to give up on her; yet there is something about her personality shown through her first-person narration of the story that keeps one rooting for her.

I was torn between my compassion for her past and exasperation over how her current choices were negatively impacting her future. Sometimes I wanted to take her by the shoulders and shake her, other times I wanted to cry for her. In the end, however, I couldn’t help but like her.

When a girl does things like snatch a few extra donuts out of the box because her date is eating them too fast, you just have to like her.

Sometimes the story slowed down a bit, and on more than one occasion I had to flip back through it to find the meaning of a flower previously mentioned. I discovered halfway through the book that there’s a flower dictionary at the end. It would’ve been helpful to put it after the table of contents or at least mention it somewhere in the beginning.

Overall, Diffenbaugh did a wonderful job with her debut The Language of Flowers. It is a heart-wrenching and realistic portrayal of the struggles of a broken human heart trying to push its way through the weighted soil of a hard life, and open its petals to the hope and promise of the future.

I gave it four out of five stars. This book will be included in the book giveaway at the end of the Seven Books in Seven Weeks series.