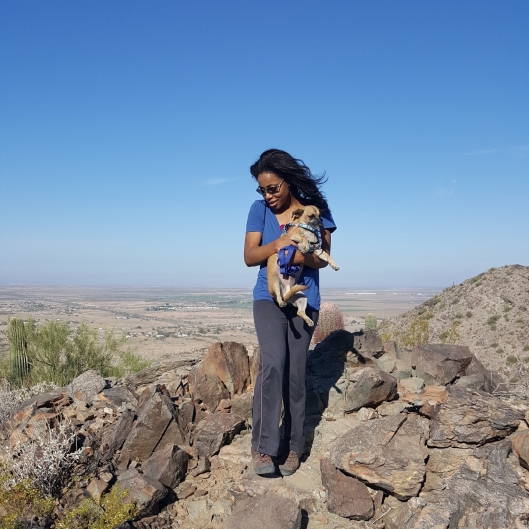 I last climbed this mountain a couple of months ago with a friend and my dog, Charlie. Charlie landed on a jumping cactus high up the trail. A whole burr clung to his paw and I couldn’t remove it. Each time I tried I ended up with spines in my hands.

The weather was hot. Charlie was heavy (20 lbs is light until you have to hold it just so in order to keep cactus spines from latching to other parts of the body). I was so mentally, emotionally, and physically grieved over the recent loss of my brother that this seemingly inconsequential situation brought me to the end of my strength.

I couldn’t leave Charlie on that mountain, but I couldn’t carry him down either, and it would take at least an hour for anyone to reach us— at which point there was no guarantee they’d be able to remove the cactus anyway.

In a voice only loud enough for Him to hear, I paused, lifted my face to the sky, and whispered in four small words the sum of my soul and all that it carried: “Jesus, I need You.”

My friend crested the mountain. She saw three men. They had serviced the mountain tower and were packing up when she rushed to catch them. One of them was a former cowhand and had wrestled steer to the ground to remedy problems just like Charlie’s.

But while Charlie is the biggest coward to ever wear canine form, he’ll scrap for it if he thinks death is imminent. He growled and snapped and rolled out of my grip each time they came near him. I was afraid they’d give up. I was distraught over the thought.

This time I cried in my heart: “Jesus, I need You.”

And they did. They took spines in their own fingers, got dirt and Charlie’s unmentionables all over one of the heavy work jackets they pinned him down with. They labored over him until his paws were free of every spine.

I didn’t want to cry. I wanted to weep. But I still had a heart too fragile to let my emotions run away with me.

So I thanked them. I asked if I could repay them. Get the jacket cleaned at least.

“Absolutely not,” they said.

Charlie stood, tested his paws, then pranced about like a show pony with his head and dirty tail high. He has no shame.

We started our descent, the three men wishing us well. The wind blew on my face, cool against the sweat on my skin. I felt inside the way Charlie looked in his prance: lighthearted and with joy restored.

Grief, trial, trouble. These all have a way of making one feel forgotten. Unseen. Unimportant. And even though truth is not changed by feelings, feelings are a powerful distraction.

But on that day, during that trivial predicament of a woman on a mountain with her quirky dog—when I truly could not take another step beyond the culmination of things pressing me down— Yeshua reminded me through the presence and persistence of those men: “I see you. I love you. I am here.”

As you head into the week, whatever it is you’re facing and however much it hurts, take your feelings, your questions, your doubts, your scheming to make it all work out; surrender these to the Son who died to save you and embrace this truth: