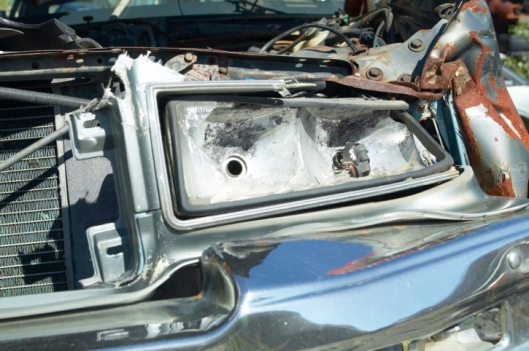 It all started in a ’77 faded red Buick Skylark. The engine was stellar, the white leather seats unmarred, and the driver a young eighteen-year-old version of clueless personified: me. There I sat behind the wheel on a humid summer morning, cruising backwards country roads on my way to work. Windows down, warm air slapping at my face, and the grating sound of locusts peaking every time I passed a tree or bush. Then it hit me: the very unladylike urge to spit out the window. For most this is an uneventful occurrence. But for me – a novice at the practice – visions of spittle flying back into the car and landing on my forehead played in my mind. I over thought it.

Too bad I had already prepped the spit in my mouth. I had to do something with it. Convincing myself it couldn’t be that hard, I leaned my head as far out the window as I could, and let fly. It didn’t boomerang right back at me as I had feared. But all the same I suspected it didn’t clear the car. Oblivious that I was otherwise occupied in steering this heavy vehicle down a two-lane residential street, I craned my neck further out the window and turned it to investigate the car’s rear. Colossal error.

Residential roads in parts of rural Oklahoma can be a bit complex. While the driveway leads all the way to the street, there are ditches to separate each driveway from the next. So for about four houses, me and my Buick barreled down ditches, only to be tossed into the air with each driveway collision, taking a host of mailboxes and garbage cans with us. By the time it was over, I was parked in the middle of the street with the windshield busted out, the hood up, and the entire car inexplicably totaled beyond repair.

Elderly residents flocked out of their houses at the noise, followed quickly by the arrival of the police. They all wanted to know the same thing: Are you okay? Are you hurt? Can you stand? When I confirmed I was fine, the inevitable was asked: What happened?

What happened indeed! I couldn’t bring myself to say, “I spit out the window and was checking to see if it landed on the car.” Especially since that car had previously belonged to my beloved great-grandfather, who passed away only months before. I couldn’t – and didn’t – say what really happened. Instead I said the first alternative that came to my mind. “The steering wheel locked. I don’t know why.”

I felt guilty as soon as the words were whispered. I felt even worse when those sweet elderly people proclaimed me the poorest dear they’d ever seen – giving me hugs and rubbing my back and thanking the Lord “this precious child” was unhurt. And worse still was having to repeat the lie to my grandmother, my parents, my aunts. Oh the agony of deceit.

It took me years to confess the truth of that accident to anyone. Why? Because like most people, I feared rejection, unforgiveness, and criticism. I made a mistake. I wrecked a classic family heirloom, and wrecked the truth right along with it. But in the end I found the courage to fess up. And I learned a great lesson. We all make mistakes. Sometimes we right them, sometimes we make them worse. But nothing is irredeemable. In my debut novel, you’ll find characters just as flawed as the clueless eighteen-year-old driving the old Buick, and as imperfect as your neighbor and yourself. Some make bad decisions with the potential to wreck their lives, and they learn about consequences and redemption in the process.

What things in your life qualify as a classic wreck? Is it something you can laugh about now? Or does it still hang in the shadows threatening to surface at the most inopportune time?

2 thoughts on “A Classic Wreck”